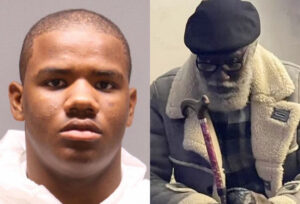 A 14-year-old boy, Richard Jones, has been charged with third-degree murder and conspiracy in connection with the fatal beating of a 73-year-old man in Philadelphia.

The teen faces charges, while his 10-year-old brother was released after turning themselves in on Monday, CBS Philadelphia reports. The brothers were among a group of seven juveniles who were captured in surveillance footage beating James “Simmie” Lambert Jr. with a traffic cone last month.

Lambert later died from injuries to his head. Police are still on the search for the other teens seen in the disturbing security footage.

Videos show a group of four males and three females taunting and striking Lambert with a traffic cone along the 2100 block of Cecil B. Moore Avenue in North Philadelphia. The role of the two brothers who turned themselves in has not been revealed.

Police are expecting others from the group to start turning themselves in.

Officials also expect the other teens to face murder charges.

“Certainly on the very limited information we have it seems very likely, yes,” Krasner said.

The attack happened around 2:30 a.m., a week before the city’s curfew was implemented. But officials are still questioning why the juveniles were out so late without any parental guidance.

“We all have a role to play as parents and one of the roles is to try to encourage and push our kids to do things that make sense,” Krasner said.

Lambert’s family is hoping all of the juveniles find it in their hearts to turn themselves in.

“Let them turn themself in, turn yourself in. How could you let us suffer like this? You took him away from us,” Lambert’s sister Elsie Stephens said.

On Wednesday, police say a 14-year-old girl identified as a person of interest turned herself into the Philadelphia Police Department’s homicide unit, Fox 29 reports. The District Attorney’s Office says she was also charged with third-degree murder and conspiracy. Four of the teens have turned themselves in so far.