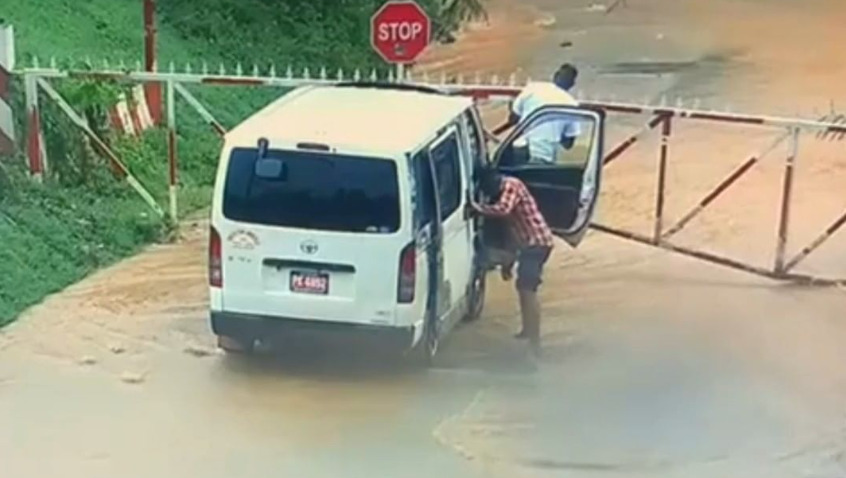 At some time today, two motorists who seem to have not gotten the memo that the Gorge was cordoned off due to flooding, tried to access the damhead by breaking the locks to the gate that was securing the entrance.

The motorists, travelling in a white minibus with a red license plate (signifying that they work in public transportation) were caught on CCTV footage. Tvjnews posted the footage on their official Instagram account with a message to others about finding alternative routes.

The caption stated, “Two motorists have been captured on CCTV footage trying to break locks to enter the Bog Walk Gorge in St. Catherine which has been closed due to flooding. The National Works Agency says motorists should use alternative routes through Sligoville, and Barry in St. Catherine.”

In the video, one of the men (wearing a white shirt) can be seen fiddling with the locks while the other (in a plaid dress shirt) riffles through the vehicle, after which he joins the other at the gate and tries to break the locks with a blunt object retrieved from the bus. They were standing in the middle of a water-covered roadway. When the men realized that they were unable to remove the lock, they were forced to turn away.

Someone commented on the post after watching the video and said, “Mek dem galang we will hear it on the news kmft?,” while another individual stated, “Because if the people them lock the gate because of flooding why you ago pull it and when unu drown unu blame government.”

Take a look at the video footage below: