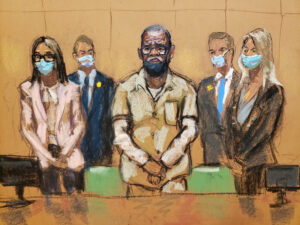 On Friday, a judge ruled that R. Kelly’s jail commissary account of $27,828 to be garnished and held for the victims of his sex trafficking conviction after having lost his request to recover the money.

The disgraced singer has been left with a mere $500 in jail funds after $900 will go towards a court fine and the rest towards the victims, wrote U.S. District Judge Ann M. Donnelly in a ruling, reports Rolling Stone. Despite Kelly’s lawyers fighting the ruling, Donnelly rejected the bid “because he owes substantial fines.”

The 55-year-old is currently being held at the Metropolitan Correctional Center in Chicago, after being convicted on eight counts of sex trafficking and racketeering on Sept. 27, 2021. He was sentenced to 30 years by Donnelly on June 29, 2022, along with the $140,000 of fines he has yet to pay. The judge issued Kelly a $100,000 fine for the conviction and a $40,000 in penalties for human trafficking.

Although the restitution amount has not been set, prosecutors have been seeking the freezing of his account since last month.

The judge ruled in favor of the victims, noting the bid was “appropriate” and that they had a rightful claim “‘to full and timely restitution.’”

Donnelly wrote, “The defendant’s remaining claims — that the [Bureau of Prisons] unlawfully ‘encumbered Mr. Kelly’s funds’ and that the BOP and the government should be sanctioned — have no merit.”

According to Insider, Kelly is due in court on Sept. 28 for a restitution hearing that will determine the amount paid out to his victims.

The former singer is also awaiting trial for federal pornography charges and sexual abuse of minors at the Dirksen U.S. Courthouse in Chicago. He has pleaded not guilty.

In 2008, Kelly was acquitted of 14 child pornography charges in Illinois.