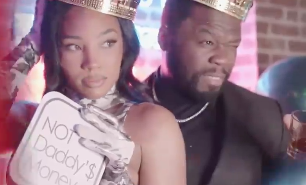 50 Cent began dating his girlfriend Jamira “Cuban Link” Haines in 2019. Since then, the couple has given fans a glimpse into their relationship by sharing photos and viral clips on social media.

On June 17, Haines was seen asking the mogul to go shopping following his recent performance in Paris. In the Instagram Story, the aspiring lawyer said, “Babe, you know what I was thinking?” 50 Cent, who rarely appeared on camera, could be heard responding, “What you was thinking?”

Haines replied by telling 50 Cent that they should hit all the stores the next day. She stated, “We should go to all the stores tomorrow.” The “In Da Club” emcee replied, “All of the store, huh?” When the 27-year-old disclosed that she was serious about the request, 50 Cent took a deep breath and said, “Aw, man, I feel like I’m catching COVID.”

Following his answer, Haines bursts out in laughter and calls 50 Cent’s bluff by telling him it’s coincidental that he’s getting sick after she brought up shopping. She said, “How you catching COVID when I want to go shopping.” The clip ends with the couple laughing over his remarks.

As fans circulated online, many were left in tears over 50 Cent’s comments. One individual points out that the rapper created a new excuse for men.

“He said, I don’t know whatchu heard about me (laughing emoji) can’t gotta dolla outta me.”

“50 just discovered a new way to catch the ‘rona. Asking men to take us to all the stores.”

Among the previous remarks, others raved over the pair’s relationship. A couple of Instagram users claimed that Haines brought out a softer side of 50 Cent. One wrote, “Good to see his soft side She definitely brought it out of him!”

Another said, “He calmed down so much … thanks girl.”

While the couple was…