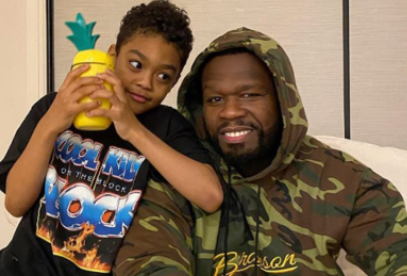 In the Instagram post, Jackson also disclosed that in honor of his son’s birthday, which was on Sept. 1, he threw Sire a “Call of Duty” theme party by sharing images from the event.

50 Cent reveals that he threw his youngest son Sire Jackson a Call of Duty themed party in honor of his 10th birthday. @50cent/Instagram

Call of Duty, originally released in 2003, is a first-person shooter video game focused on multiple locations. Depending on which version an individual gets of the series, the location settings may occur in World War II, the Cold War, outer space, and futuristic worlds.

Multiple guests that attended Sire’s party included Bow Wow’s daughter Shai Moss, and Chris Brown’s daughter Royalty Brown. In addition to the upload, Jackson expressed in the caption that he couldn’t believe how quickly his son was growing up.

The 47-year-old wrote, “My Boy @sire_jackson turned 10 yesterday. He is getting so big I can’t believe how fast the time went.” As fans viewed the upload, many agreed with Jackson’s previous sentiments and mentioned that Sire has grown very fast.

“Time is flying, he gonna be taller than you next year. “

“No he really is getting big fr.”

“You know what…. I watched this baby grow up on IG…. Why is he this big. Happy Birthday Handsome.”

“Stop playing. He got so big. I remember when he was a baby. Wow I’m getting old lol.”

Among the other remarks, a handful of people commented on how frequently Royalty Brown and Shai Moss attend celebrity parties. One wrote, “He had the fly girls there okayyyyyy.”

Another said, “Shai & Royalty be at all the celeb kid parties.” A third social media user stated, “OK Chris Brown and Bow Wow’s daughter is at all…