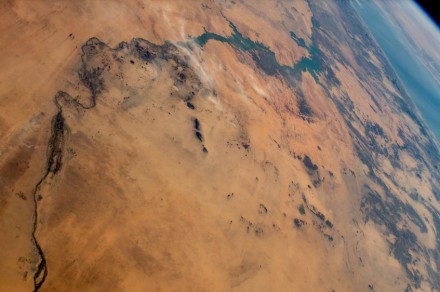 6 awesome Earth images captured from the ISS in July

The International Space Station has been orbiting 260 miles above Earth for the last two decades.

While its primary function is as a space-based laboratory for performing science experiments in microgravity conditions, the orbital outpost also allows astronauts to conduct Earth observation studies as well as the chance to capture gorgeous images of our amazing planet.

Here we share a selection of the most striking images taken during July, all of them taken with a Nikon D5 DSLR camera and a range of lenses.

First up is this stunning view of sunlight bouncing off the Coral Sea northeast of Australia, while in the foreground we can see a pair of the space station’s main solar arrays.

Next is an image showing the Nile River winding toward the Mediterranean Sea, captured as the ISS passed over Sudan in northeast Africa.

While passing over the Gulf of Mexico, an astronaut captured this cool image of New Orleans and its surrounding suburbs, including Gretna, Metarie, and Kenner. The Mississippi River is clearly visible while the edge of Lake Ponchartrain can be seen at the top of the image.

This incredible capture shows an orbital sunrise, taken from the station as it passed over Texas. The station’s high speed of travel means that astronauts on board the satellite experience around 16 such events in the course of 24 hours.

Taken as the ISS passed over the African nation of Namibia, this fabulous image shows the vast Namib Desert on the country’s Atlantic coast.

The sixth and final image in the set features a striking patchwork of agricultural activity in the west of the Brazilian state of Bahia, which NASA notes is part of the Cerrado, a huge tropical savanna in the South American nation.

Want to learn more about life on the space station? These fascinating videos lift the lid on how visiting astronauts pass the time aboard the orbital facility.