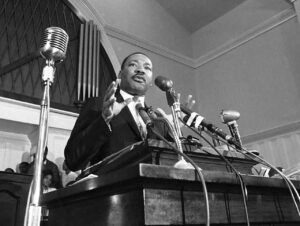 An authentic letter signed by Dr. Martin Luther King Jr., from the Southern Christian Leadership Conference (SCLC) is being sold for $95,000.

AfroTech reports the letter is being sold by Moments In Time, which buys and sells original letters, manuscripts, and signed photos of important figures in history, literature, science, music, and other areas.

Dr. King, the first president of the SCLC, wrote and signed an analysis of the use of the N-word.

“The words’ dark skinned American’ constitute a vivid depiction of both citizenship and race just as you point out,” read a letter dated Jan. 18, 1966. “I agree wholeheartedly with you that the import of that term is in salient contrast with the connotation attached to the word ‘nigger.’ The word ‘nigger’ carries with it a meaning deeply rooted in the debilitating racist case ordering of our society’s slavery and epoch and segregation era.”

At the time, the SCLC focused on issues including economic inequality, which coincided with the group starting the Poor People’s Campaign in 1967, in which Dr. King was the president until his assassination in 1968.

“The term, ‘dark skinned American’ often finds its way into my speeches and writing and, encouragingly, I notice it, too, in the usage of so many others,” Dr. King continued in the letter. “The use of that and similar appellations reflect both our great heritage and our devotion to a brand of Americanism of the highest order.”

The page with the letter does not indicate how long the letter can be bid on or who else has bid on the letter. Additionally, the price tag for the letter is available on request.

The SCLC, Poor People’s Campaign, and the Southern Poverty Law Center continue to follow the lead and fight for the same rights and freedoms the civil rights activist and HBCU graduate fought for.