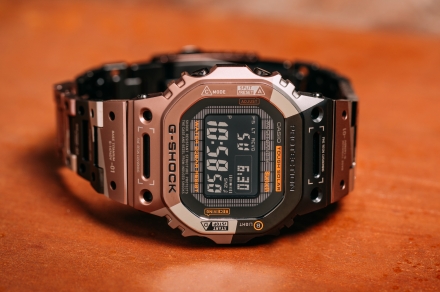 One of the highlights of Casio G-Shock’s 2021 release calendar was the superb GMW-B5000TVA, a sci-fi-inspired timepiece based on its popular “square” B5000 model, which would have looked right at home on Ripley’s wrist in Aliens. Perhaps unsurprisingly, G-Shock wants to see if it can capture the same degree of attention again, and will release a second version, called the GMW-B5000TVB, this summer.

Gone is the cool black finish from the B5000TVA and in comes a geometric camouflage pattern in a combination of black, brown, and shades of beige. Sharp lines separate the different colors, matching the watch’s squared-off, angular case and bracelet. The first version evoked thoughts of giant fighting robots and the pilots housed within, while this version looks like the watch that would be worn by those on the ground supporting them.

The color scheme is the most noticeable alteration to the design, but look closely and there are some other changes. Where circles were used to highlight the function of the buttons on the B5000TVA, they have mostly been changed to triangles on the B5000TVB, and some of the highlighted text — the Tough Solar branding, for example — is now a contrasting orange, rather than subdued shades of gray on the former model.

The text applied to the bracelet and clasp gave the B5000TVA its character and it returns here with a few tweaks, most noticeably the lack of reference to any Diamond-Like Carbon Coating (DLC) which is missing from the watch this time around. All the text is laser engraved on the titanium case so it won’t disappear over time, and the sapphire crystal over the screen will keep it safe from scratches, too.

Casio has thrown all its available technology at the GMW-B5000TVB too. In addition to the Tough Solar feature, it has a Bluetooth connection to your phone, which helps simplify some of the watch’s commonly used functions such as adjusting the world time and starting timers. It does not track any activities or deliver notifications like G-Shock’s more fitness-focused connected watches, such as the GBD-200.

What else? Casio’s Multi-Band 6 feature,…