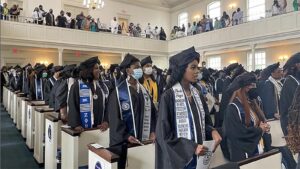 The Rolling Jubilee Fund, a nonprofit, and the Debt Collective advocacy group have announced their partnership to cover the $1.7 million tab in student debt for HBCU Bennett College, an all-woman institution in Greensboro, North Carolina.

On Friday, the United Negro College Fund revealed the generous gift to 462 lucky graduates in the class of 2022.

Bennett College released a statement to clear up any misinterpretations about the cancellation: “We understand that this has been an exceptionally challenging time and want to ease people’s burdens. The debts that were erased for these 462 individuals were debts owed directly to the school. These debts are different from federal and private student loans, which we do not have the ability to cancel because they are owned by the federal government.”

Per USA Today, Bennett College President Suzanne Walsh initially ignored the email from the Debt Collective promising to cancel the overdue bills at her school. She was skeptical about the proposition to wipe out $1.7 million in debt. However, once officials of the HBCU spoke to the activist group, they realized how real this blessing was.

According to a statement released by Braxton Brewington, a representative for the Debt Collective, Bennett College was chosen to receive the debt relief due to data that revealed Black women were more prone to student loan debt than any other demographic of student loan borrowers.

“These are the people that are really taking the brunt of the student debt crisis,” Brewington said.

News of the $1.7 million cleared for Bennett College graduates comes just after President Joe Biden announced the White House’s nearing decision to clear only $10,000 of debt per borrower, after his presidential campaign run promised the cancellation of all federal student loan debt.

His administration shares that the president is continuing to weigh his options and that no final decision has been made, reports the Hill.

Since Biden has effectively paused student loan payments since the start of the pandemic, many critics propose full cancellation is possible, as the pause has not made…