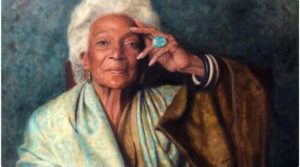 Actress Nichelle Nichols Passes Away At 89

Actress Nichelle Nichols passed away at the age of 89. According to the Los Angeles Times, Nichols died of heart failure on the evening of July 30 in Silver City, N.M.

Nichols was born in Robbins, Ill. on Dec. 28, 1932. At the age of 16, she sang with Duke Ellington before going on to play the role of Carmen in a Chicago production of Carmen Jones. She also performed in Porgy and Bess in New York as an uncredited dancer before going on to play Lt. Uhura on Star Trek, where she shared television’s first interracial kiss with William Shatner as Capt. James Kirk in 1968. Interracial marriage was illegal until 1967. During an interview with the Archive of American Television, Nichols said that the kiss made people think of the world differently.

Nichols starred in the television series for three seasons and appeared in 66 episodes. She also appeared in six Star Trek films. She once said that Rev. Martin Luther King Jr. convinced her to remain on the show after she yearned for Broadway by noting her role on the show defied Black women’s stereotypes.

Excellence in representation matters even more.

Nichols, who had already handed in her resignation letter, recalled feeling that King had been right.

“I could say nothing. I just stood there, realizing that every word he said was the truth.”

After she told the show’s creator, Gene Roddenberry, that she’d changed her mind a few days later, he gave her back the resignation letter, which had already been torn to shreds. “He took out my…