BREAKING NEWS
GMT-4 12:19
Home Economics AJ Brown Has Nothing But Compliments for DeVonta Smith After Joining Eagles to Support the ’No. 1 Type Receiver’ 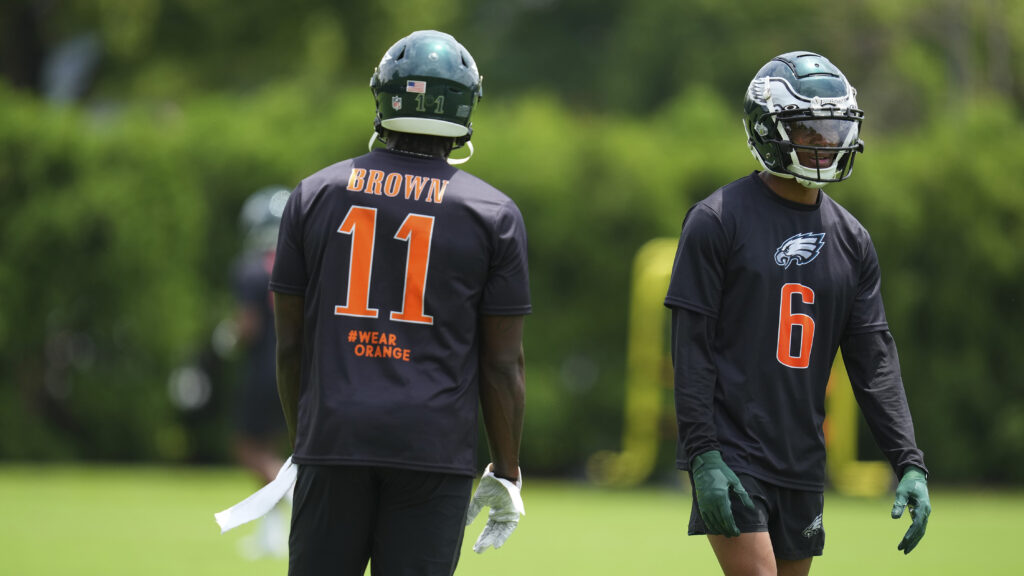 AJ Brown Has Nothing But Compliments for DeVonta Smith After Joining Eagles to Support the ’No. 1 Type Receiver’

The 2021 Philadelphia Eagles made a surprise run to the postseason and winning nine games after preseason predictions had them finishing with 6.5 wins. They were blown out by the Buccaneers in the opening round of the playoffs, but first-year head coach Nick Sirianni knew he had something positive to build on.

A.J. Brown #11 and DeVonta Smith #6 of the Philadelphia Eagles look on during OTAs at the NovaCare Complex on June 3, 2022 in Philadelphia, Pennsylvania. (Photo by Mitchell Leff/Getty Images)

But he also felt he needed more talent to help quarterback Jalen Hurts continue to develop. With former Heisman Trophy winner DeVonta Smith proving his worth in year one, Sirianni felt he needed someone opposite “Smitty,” to take pressure off of him. On draft night the Eagles went all in on trading for Tennessee Titans disgruntled star receiver AJ Brown.

The team immediately signed the former Ole Miss Rebels star to a four-year, $100 million extension. The whopping salary suggests that Philly believes Brown is top dog, but Brown, in an effort to define roles and make the transition as smooth as possible, is calling Smith wide receiver No. 1.

In a recent interview with the Philadelphia Inquirer, Brown spoke highly of his former SEC rival-turned-teammate.

“In my opinion, Smitty is wide receiver No. 1. He’s a really good route runner. I think the sky is the limit for Smitty.”

The Eagles now have two talented receivers capable of being the team’s top pass-catcher. Hurts, a second-year starter, should be even better than he was last season with the improved artillery.

Smith And Brown Have A Connection

If Smith wasn’t the consummate team player and a high-character guy, trading for another top-flight receiver might have caused some problems. Upon Brown’s arrival, Smith was quick to reach out and welcome him to the city of “Brotherly Love.”

“Smitty reached out to me. I know he’s excited and I’m excited to work with him … He has a lot of talent. He’s a speedster guy. You know, gets in and out of breaks. He’s a great route runner. So he is a special…