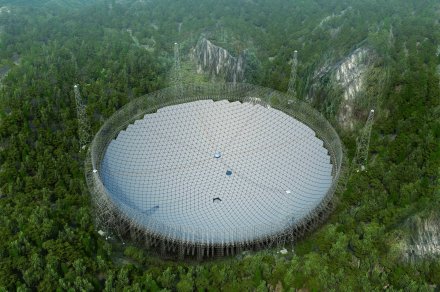 Alien signal from China telescope due to radio interference

A signal detected by a Chinese telescope and originally reported as possible evidence of extraterrestrial intelligence is almost certainly due to human factors, one of the researchers on the project has said.

The signal, detected by the Five-hundred-meter Aperture Spherical radio Telescope (FAST), was announced this week by the newspaper of China’s Ministry of Science and Technology, Science and Technology Daily, which said it had detected “possible technological traces of extraterrestrial civilizations.” However, researcher Dan Werthimer of the University of California, Berkeley has told Live Science that the signals are “from [human] radio interference, and not from extraterrestrials.”

FAST is an enormous ground-based telescope that is extremely sensitive and picks up radio signals from different points of the sky. It is used for research into SETI (the search for extraterrestrial intelligence) by looking for technosignatures, which are signals that would be produced by the technology of distant civilizations.

FAST looks through huge amounts of data to search for evidence of technosignatures, but there are difficulties resulting from it being so sensitive. SETI researcher Danny Price of Curtin University, who was not involved in the FAST research, explained in The Conversation that because FAST is so sensitive, it will pick up signals from many sources and is prone to detecting radio interference. He cautioned the public to, “stay intrigued, but don’t get too excited” when hearing about possible signals of alien civilizations.

The signal detected by FAST had been of particular interest because it was in a narrow band, which is unusual from natural sources. But one of the Chinese researchers, Tong-Jie Zhang, also cautioned in Science and Technology Daily that the possibility that the signal they detected was radio interference was “very high.”

That’s because there are so many radio signals given off on Earth that it’s very hard to avoid them all. “The big problem, and the problem in this particular case, is that we’re looking for signals from extraterrestrials, but what…