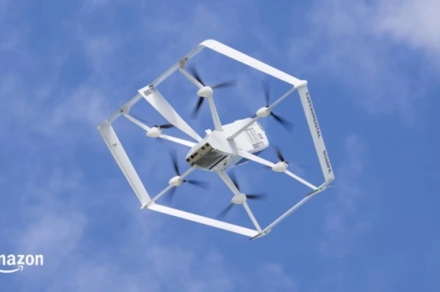 Amazon shows off new delivery drone ahead of trial service

Almost a decade after Amazon founder Jeff Bezos revealed the company’s grand plan for drone delivery, it has yet to establish a regular service using the flying machines.

While the company has invested huge amounts of money in the initiative and assembled teams to design, build, and refine its delivery drone, various challenges mean the widespread rollout of a drone delivery service with package-carrying Amazon drones buzzing to customers’ homes still seems a ways off.

Keen to let everyone know that its drone team is still intact and focused on its goal to use diminutive flying machines for last-mile deliveries, Amazon this week unveiled a new drone design (below) and also revealed plans for a trial service where customers can have the new machine deliver orders to their homes.

The service will begin “later this year” in Lockeford, California, about 30 miles southeast of downtown Sacramento.

Customers involved in the trial service will be able to browse a selection of Prime Air-eligible items on Amazon’s shopping site. Hit the “buy” button and an estimated delivery time will be provided, along with the ability to track the drone as it makes its way to its destination.

After arriving at the customer’s address, the drone will descend to a safe height before lowering the package to the ground using a tether.

Those involved in the trial will be invited to provide Amazon’s drone team with feedback so that it can refine and improve the service.

Trumpeting its long-running drone efforts, Amazon said it has created a “sophisticated and industry-leading sense-and-avoid system that will enable operations without visual observers and allow our drone to operate at greater distances while safely and reliably avoiding other aircraft, people, pets, and obstacles.”

The e-commerce giant added that it’s been through more than two dozen prototypes of its delivery drone to date, with the latest model deploying six rotors and a protective outer frame.