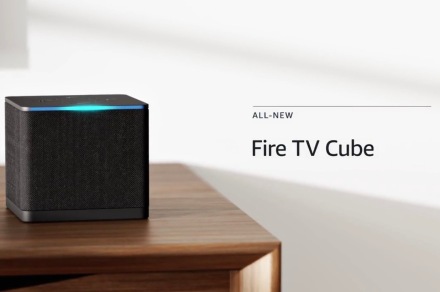 Amazon has announced a new version of its Fire TV Cube streaming device, priced at $140, and it’s the first streamer we’ve seen that includes an HDMI input in addition to its HDMI output, letting it display content from devices like cable or satellite set-top boxes or Blu-ray players, while it controls those devices via Alexa or the included remote control. And speaking of that remote, it’s been given an upgrade too: the $35 Alexa Voice Remote Pro now includes backlighting and a remote control finder feature — both of which are absent from the remote that Apple includes with its Apple TV 4K.

You can pre-order both the new Fire TV Cube and the Alexa Voice Remote Pro starting September 28 on amazon.com.

The third-gen Fire TV Cube also has Wi-Fi 6E support, and “Super Resolution Upscaling,” which takes any non-4K content like 1080p HD and greatly improves how it looks on a 4K TV.

The biggest benefit to the HDMI input is that it simplifies interactions with your other devices. The Fire TV Cube has always included voice-command remote control, but it was a bit clunky. It involved sending infrared commands to your external devices like your cable box and TV and using them to trigger channel changes and HDMI input selection. Now, you can just say, “Alexa, tune to ESPN on cable”  and it will show up within the current Fire TV interface — no changing of inputs needed.

Another improvement is the addition of a full-size USB-A port on the back of the device. In the past, if you wanted to connect a webcam or a USB stick, you needed a MicroUSB-to-USB-A adapter, otherwise known as an on-the-go (OTG) cable. Now, you can plug these devices in directly.