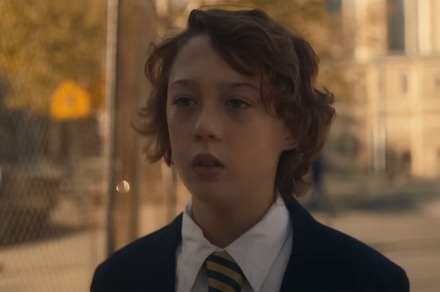 Armageddon Time trailer takes a darker view of the ’80s

Shows like Stranger Things tend to gloss over the uglier side of the ’80s in favor of nostalgia. To a certain extent, that’s understandable. The ’80s had some fun times for pop culture lovers. But the new drama, Armageddon Time, is taking a decidedly darker look at what life was like for a young Jewish boy named Paul Graff. His innocent friendship with a Black classmate, Johnny, gets Paul expelled and sent to another school. More alarmingly, even Paul’s mother tells him to stay away from Johnny.

Perhaps the most disturbing, and thus realistic, aspect of the trailer is that it’s pretty clear that Paul does pull away from Johnny. Instead of defending his friend against his new classmates, Paul looks uneasy as he listens to their racist remarks about Johnny. It’s a tough situation to be in, but Paul isn’t making the right choices and that may cost him his friendship with Johnny. It may also weigh heavily on his soul.

The one family member who actually gives Paul some good advice is his grandfather, Aaron. He lived through the Holocaust and experienced anti-Semitism throughout his life. That’s why he won’t tolerate intolerance toward others, and he encourages Paul to stand up for his friend.

James Gray wrote and directed Armageddon Time based on his own experiences growing up in the ’80s. The film will hit theaters on October 28.