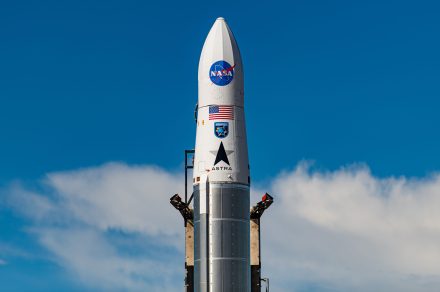 Update June 12: The launch of the TROPICS-1 mission has failed. “After a nominal first stage flight, the upper stage of the rocket shut down early and failed to deliver the TROPICS CubeSats to orbit,” NASA wrote in a brief update. The satellites were lost in the incident. Astra says it will perform a full data review.

Today, Sunday June 12, private rocket company Astra will launch two satellites for NASA. The two small CubeSats will be launched using an Astra Rocket 3.3 from Space Launch Complex 46 at Cape Canaveral Space Force Station in Florida, and the launch will be livestreamed so you can watch along at home.

Below we’ve got all the details on the launch and how to watch it.

The mission, called NASA TROPICS-1, will launch two satellites for NASA’s Time-Resolved Observations of Precipitation structure and storm Intensity with a Constellation of Smallsats (TROPICS) project. This constellation will eventually consist of six satellites working together to monitor storm events, with two satellites launching today and the other four being launched in two separate launches later this summer.

The TROPICS project will observe the Earth from space to gather information on how storm events start and develop. “TROPICS will study tropical cyclones like hurricanes, some of the most powerful and destructive weather events on Earth, by measuring storm characteristics with a sensor about the size of a coffee cup,” NASA writes.

“The miniaturized microwave radiometer detects the thermal radiation naturally emitted by the oxygen and water vapor in the air. TROPICS has the potential to provide near-hourly observations of a storm’s precipitation, temperature, and humidity. This data can help scientists increase understanding of the processes driving rapid changes in storm structure and intensity, which will improve weather forecasting models.”