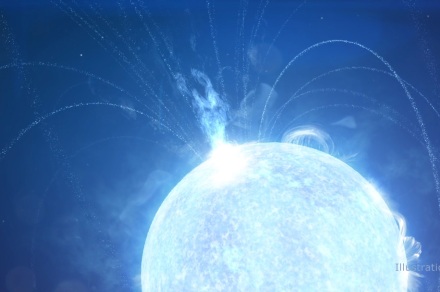 There are all sorts of strange signals which we detect coming from space, and one set of signals which are particularly intriguing is called fast radio bursts. These incredibly bright pulses of radio energy are very brief, at just a few milliseconds in length, but they travel enormous distances between galaxies. Now, astronomers have discovered one such burst which not only has a surprisingly regular pattern but also lasts a much longer time.

The fast radio burst (or FRB) in question lasted for up to three seconds, which is a thousand times longer than the average for an FRB. It also repeats in bursts of 0.2 seconds, making it unusual on two fronts. Named FRB 20191221A, the burst was discovered by a collaboration of astronomers from McGill University, MIT, and other institutions using the CHIME telescope.

A powerful X-ray burst erupts from a magnetar — a supermagnetized version of a stellar remnant known as a neutron star – in this illustration. NASA’s Goddard Space Flight Center/Chris Smith (USRA)

“Not only was it very long, lasting about three seconds, but there were periodic peaks that were remarkably precise, emitting every fraction of a second — boom, boom, boom — like a heartbeat,” said Daniele Michilli of McGill University and MIT, leader of the research, in a statement. “This is the first time the signal itself is periodic.”

The repeating nature of the signal can help astronomers to theorize about what might be causing the bursts. Their exact cause is still unknown, but many astronomers think they are caused by a type of neutron star with a powerful magnetic field called a magnetar.

“There are not many things in the universe that emit strictly periodic signals,” said a co-author of the paper, Aaron Pearlman of McGill University. “Examples that we know of in our own galaxy are radio pulsars and magnetars, which rotate and produce a beamed emission similar to a lighthouse. And we think this new signal could be a magnetar or pulsar on steroids.”

There are magnetars in our own galaxy which produce radio bursts, but the signal detected recently is far, far brighter than these…