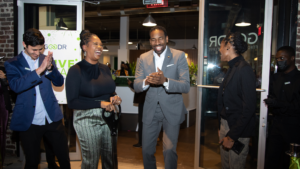 The Atlanta Business Chronicle reported on the five-year-old company’s recent acquirement of $8 million through a Series A funding round. This feat may mark the single largest investment round for Goodr.

The round was led by Precursor Ventures and supported by Collab Capital, Gratitude Railroad, Emerson Collective, Backstage Capital, Innovations For Impact, Telus Pollinator Fund, Kimbal and Christiana Musk, and more. In addition to $8 million, Goodr obtained debt financing from Atlanta Emerging Markets Inc., a community development entity specializing in gap financing for businesses or developers with large-scale projects, for $300,000.

“I am thankful to the many investors that believed in Goodr for contributing to this milestone for our company,” said founder and CEO Crowe, per Afro Tech. “We have been very capital efficient over the last five years, reaching millions in annual revenue with a team of just five people for years. I look forward to growing our team, expanding to new markets, and building new products to end hunger and help businesses reduce food waste. It’s an exciting time for all of us here at Goodr.”

BLACK ENTERPRISE previously reported that Crowe’s commitment to the fight against hunger and homelessness began in 2013. She created Sunday Soul with her company Black Celebrity Giving, an initiative in which she cooked and served over 30,000 meals to those experiencing hunger. She spoke to us about how Goodr started.

“This idea was sparked for me when one of our Sunday Soul events went viral,” Crowe explained to BLACK ENTERPRISE.

“I saw a lot of the comments asking which restaurants donated the food? The funny thing was, that I actually purchased all of the food myself. I started doing research and was blown away by how much food goes wasted, and how many people go hungry. This is a problem we can solve.”