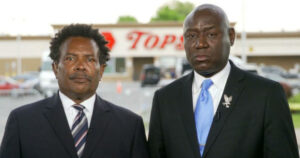 After the tragic shooting in Buffalo, New York, when a white teenager purposefully targeted Black people as his victims, a civil rights attorney urged President Joe Biden to take action on an anti-Black hate crime bill.

According to The Guardian, attorney Benjamin Crump is now representing one of the victims’ families who 18-year-old Payton Gendron killed. Crump is officially representing the family of Ruth Whitfield, 86, who was killed in the shooting over the weekend.

Whitfield was one of 10 people killed when the white supremacist targeted Black victims and also wounded three others in the shooting.

Crump demands that law enforcement officials treat this as an “act of domestic terrorism.”

“This was an act of domestic terrorists, and America responds to terrorism at every level, and they have to do that here,” Crump stated at a press conference. “Just because it was a Black grocery store doesn’t make it any less than any other massacres, whether it’s Columbine or the Oklahoma City bombing.

“We can’t sugarcoat it; we can’t try to explain it away talking about mental illness. No, this was an act of domestic terrorism perpetrated by a young white supremacist.”

The Buffalo, NY grocery store shooting was an act of domestic terrorism! America MUST respond to this act of racism, bigotry, and hate NOW. I urge the passage of a bill that supports the prosecution of hate crimes against Black people! pic.twitter.com/UBLylGhpZd

Crump has also stated that this means that federal legislators must now pass a hate crimes bill that sits before Congress, the George Floyd Justice in Policing bill. The bill is currently stalled, and he feels that the president must use his leverage to secure that this bill will be signed.

“Black America is suffering right now,” he said. “And we need to know that our top leader in America reacts and responds when we are hurt.”

As the president and his wife visit Buffalo today, the United States Justice Department is investigating this incident as a hate crime and an act of racially motivated violent extremism.