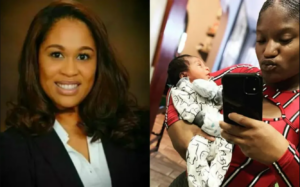 Nicole Linton, the driver who is accused of killing six people after running a red light while speeding in Windsor Hills, California, may have had an “apparent lapse of consciousness” leading up to the car accident.

According to the Los Angeles Times, based on legal paperwork filed by Linton’s defense attorneys, the nurse was suffering a “frightening” mental health emergency prior to the deadly August 4 accident.

Linton drove the vehicle that ran into the intersection and killed five adults and an unborn child. She has been charged with a total of six counts of murder, including the pregnant woman’s unborn child. She is also facing five manslaughter counts.

The victims of the crash were Asherey Ryan (who was 8 and1/2 months pregnant); her boyfriend and father of that child, Reynold Lester; and Ryan’s son, Alonzo Quintero. Nathesia Lewis, and Lynette Noble also died in the crash.

In the documents submitted, her attorneys acknowledged that she was struggling with bipolar disorder for the past four years. Immediately after the accident, doctors decided that the nurse suffered an “apparent lapse of consciousness” when she crashed her Mercedes-Benz that day.

On August 6, Dr. William Winter treated Linton at the Ronald Reagan UCLA Medical Center and wrote in his report that, “She has no recollection of the events that led to her collision.The next thing she recalled was lying on the pavement and seeing that her car was on fire.”

Linton’s attorneys want her released from jail because of her mental health struggles; her “apparently bizarre” activities should not be the reason to keep her imprisoned. They would like for her to be released for testing at UCLA Resnick Neuropsychiatric Hospital. They offered that she would wear an ankle monitor as well as submit to any other requirements that the court chooses to set.

“Ms. Linton would be most appropriately housed in a mental health treatment facility where she can be monitored and treated for her illness,” the attorneys Halim Dhanidina and Jacqueline Sparagna wrote in the filing earlier this week.