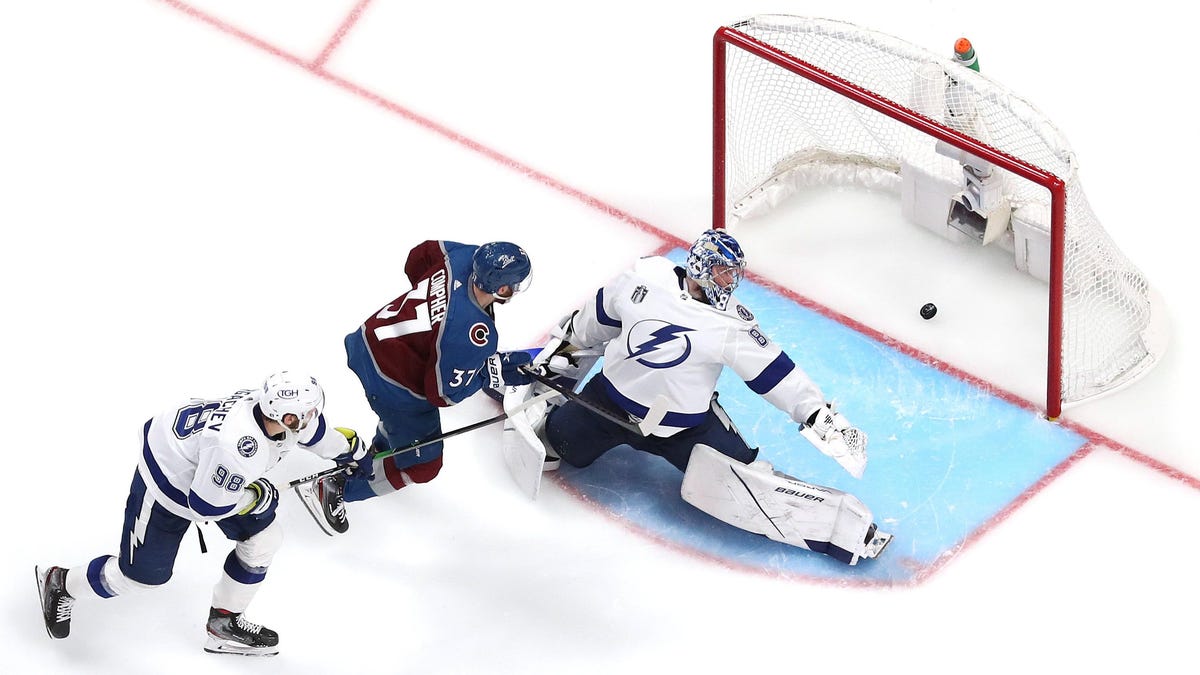 Tampa’s Andrei Vasilevskiy fails to defend a goal from the Avs’ Andre Burakovsky during overtime to win Game One of the 2022 Stanley Cup Final.Image: Getty Images

Usually, especially in a Stanley Cup Final, you need at least a few games before the level of play truly takes off. Coaches and teams want to try different things, chase their matchups, or keep things tight as they can to preserve already exhausted players until there is absolutely no choice. No one fears chaos quite like NHL coaches.

Thankfully, this Stanley Cup Final has Jared Bednar and Jon Cooper, who are confident enough in their teams and adventurous enough in ethos to just say, “Fuck it.”

The Avalanche and Lightning flew at each other in Wednesday’s Game 1 like Neo and Agent Smith in the subway station, though it wasn’t the best plan for the Bolts. In the first and third periods, the Avs pretty much rolled Tampa in an impure and unsightly fashion, racking up over 70 percent of the expected goals in both frames. The Avs d-men were extremely, perhaps maniacally, aggressive on the forecheck, which is how the Avs got their second goal:

Cale Makar is nearly at the circles when the Lightning have the puck, which puts him right up Nick Paul’s ass when the outlet pass gets to him, causing the turnover that Nathan MacKinnon shovels to Val Nichushkin for the goal. This was the story all of the first, as the Avs took a page out of the world’s leading soccer teams’ playbooks and basically pressed devilishly as high up the ice as they could. Usually you want your d-men holding their own blue line, not the other team’s!

But the Bolts aren’t stupid, and they did what any team does when it sees the opposing safeties drop into the box. Lob it over them:

This wasn’t the only time the Lightning simply went over the heads of the Avs, as it was something they tried whenever they got a second to look up with the puck. It got the Avs to back up for a while, or just long enough for Darcy Kuepmer to remind everyone why he’s Darcy Kuemper. Here he is letting in the tying goal in the second as he failed to move along with Mikhail Sergachev as he…