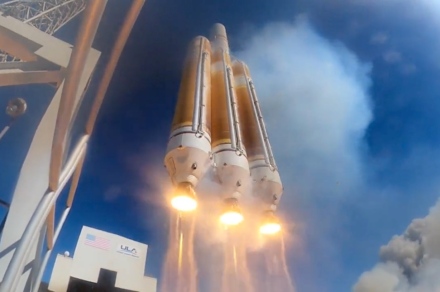 The triple-booster space vehicle lifted off from Space Launch Complex-6 at the Vandenberg Space Force Base in California on Saturday, September 24.

Tory Bruno, ULA’s CEO and president, on Tuesday shared some cool videos showing the launch from various angles. Take this close-range effort, for example, showing the Delta IV Heavy rocket blasting off from the launchpad, with the camera tracking up as it climbs skyward:

Next up, this incredible slow-motion shot of the rocket’s engines firing up to power the vehicle to space:

Want to see some fire close up from my favorite secret SLC6 viewing spot? (turn up the volume…). #NROL91 pic.twitter.com/Ss3Hzfkcb1

More footage from close to the action shows the lift-off through a fish-eye lens:

Here’s a cool fisheye shot for all you flame trench fans. Don’t forget to turn up the sound. #NROL91 pic.twitter.com/yv2JWbCP1w

Captured some distance from the launch site, this footage, which switches suddenly from actual speed to slow-motion, also shows the Delta IV Heavy at the start of its journey.