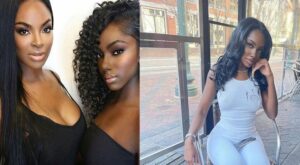 Tragedy struck the family of a Basketball Wives cast member over the weekend when she posted a message to her daughter on her Instagram account, telling her “This is not a goodbye. Mommy will see you soon.”

Basketball Wives‘ Brooke Bailey posted to her social media account that her daughter, Kayla Bailey recently passed away. While no official details have been released publicly, Pop Culture reported that the young Bailey died in a tragic car accident over the weekend. The media outlet stated that this took place on Saturday, September 24.

We do know that, through Bailey’s Instagram account, Kayla died on Sunday, September 25. She was 25 years of age.

She included the birth and death date of her daughter in her main page profile: “FOREVER ??Kayla Nicole Bailey 3/2/97-9/25/22 #PrettyBlack”

“Forever my baby, Pretty Black aka Kayla Nicole Bailey ??? This is not a goodbye. Mommy will see you soon ??”

Brooke also included various pictures of Kayla in a series of Instagram Stories posts. They also included condolences and posts from other users who acknowledged Kayla’s death.

Bailey joined the cast of Basketball Wives LA in the second season of the reality television series. Previous to appearing with Jackie Christie, Malaysia Pargo, and other cast members on the show, she was involved in the E! reality series Candy Girls. The show featured several friends who were living in Los Angeles and working as music video models. Candy Girls was on the air for just one season. The reality show eventually joined with the Miami cast as the series continued. Bailey made her official return to the series earlier this year in the show’s 10th season.

According to IMDB, the reality star was born in Brentwood, Tennessee on April 12, 1987.

No details or information has been released regarding her daughter’s funeral arrangements.