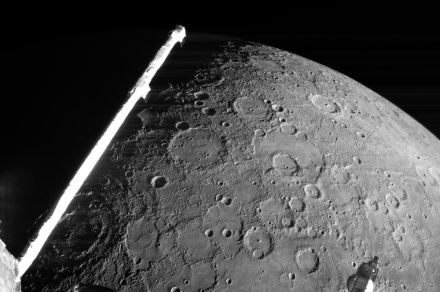 The European and Japanese team behind the BepiColombo mission to Mercury has shared the first image of the spacecraft’s recent flyby of the distant planet.

The black-and-white image shows the planet in incredible detail, its surface pockmarked by numerous craters from billions of years of asteroid and comet bombardment.

Here&#39;s a first look from today&#39;s #MercuryFlyby capturing such an amazing array of the planet&#39;s rich geological features ?https://t.co/hC6TfMmCy1#ExploreFarther pic.twitter.com/7WkYiGU0Kp

It was captured by the mission’s Mercury Planetary Orbiter from around 570 miles (920 kilometers) above the planet’s surface on June 23. The European Space Agency (ESA) noted that the spacecraft made an even closer approach just five minutes before the above was taken, coming within just 124 miles (200 kilometers) of Mercury’s surface.

Parts of the Mercury Planetary Orbiter are also visible in the image. The spacecraft’s magnetometer boom, for example, can be seen running from bottom left to top right, and a small part of the medium-gain antenna at bottom right is also within the frame.

Look toward the bottom left of the image and you’ll be able to spot the 124-mile-wide (200 kilometers) multi-ringed basin, part of which is obscured by the magnetometer boom.

This week’s flyby is the second performed by the Mercury Planetary Orbiter and comes eight months after the first, which captured an image about 620 miles (1,000 kilometers) above the planet’s surface.

“Even during fleeting flybys, these science ‘grabs’ are extremely valuable,” said Johannes Benkhoff, ESA’s BepiColombo project scientist. “We get to fly our world-class science laboratory through diverse and unexplored parts of Mercury’s environment that we won’t have access to once in orbit, while also getting a head start on preparations to make sure we will transition into the main science mission as quickly and smoothly as possible.”