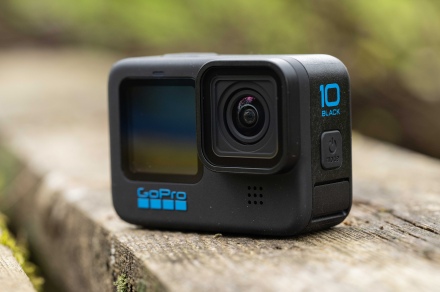 If you lead an active lifestyle and want to record most of it, you’re probably familiar with GoPros, especially given how well-known they are for being small, portable, and their excellent quality. Well, with all the Memorial Day sales going on, you’ll be happy to know that there’s an excellent one on the GoPro Hero 10 at Best Buy, bringing it down to $400 from $500 and making it the perfect time to pick one up.

There’s a lot to love about the GoPro Hero 10, the least of which is the 5.3K resolution it can film with. Not only that but it’s able to hit 60 frames per second, which is impressive for a camera this small. There’s a slo-mo mode where you can capture at 2.7K resolution, which is equally impressive, and excellent for those who love taking action shots, not to mention the 23-megapixel photo mode that works just as well in low-light conditions. It also has some industry-leading image stabilization with its HyperSmooth 4.0 tech and, combined with its rugged design, means you can film in pretty much any environment without worrying about the video being bumpy and shaky.

If you’re a blogger, this is also a great camera, especially given the front display that allows you to film yourself while seeing exactly what you’re filming. It also has the convenience of voice control, with 14 different commands to work with, so you can set it down and film yourself easily without awkwardly reaching for controls. The controls on the rear touch display are intuitive enough that you won’t be spending tons of time trying to figure out how the thing works. Finally, you can connect the GoPro Hero 10 in webcam mode to broadcast in 1080p, another great feature for bloggers and streamers.

The GoPro Hero 10 is a versatile device great for people who want it for a variety of things, and with the Best Buy deal bringing it down to just $400, it’s an excellent opportunity to pick one up. That being said, if you’re looking for a different GoPro version, we do have a list of some other great GoPro deals for you to check out.