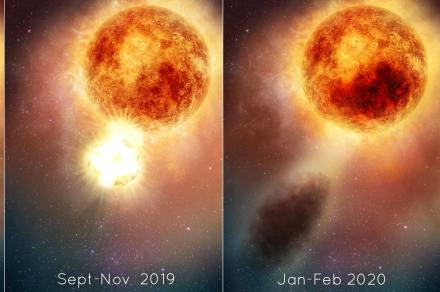 One of the brightest stars in the sky, the nearby red supergiant Betelgeuse, has been the source of fascination in the last few years as it dimmed and then re-brightened dramatically. Now, new data from the Hubble Space Telescope shows that the star blew off a huge chunk of its mass in 2019, creating a cloud of dust that obscured its light and caused the dimming effect.

This illustration plots changes in the brightness of the red supergiant star Betelgeuse, following the titanic mass ejection of a large piece of its visible surface. The escaping material cooled to form a cloud of dust that temporarily made the star look dimmer, as seen from Earth. This unprecedented stellar convulsion disrupted the monster star’s 400-day-long oscillation period that astronomers had measured for more than 200 years. The interior may now be jiggling like a plate of gelatin dessert. NASA, ESA, Elizabeth Wheatley (STScI)

Hubble data was used along with data from ground-based telescopes to create this illustration, showing how dramatically the star’s brightness changed as it threw off mass and formed a large dust cloud. This event is a brand new insight into the lives of huge red stars like Betelgeuse, which is coming toward the end period of its life and will eventually go supernova.

“We’ve never before seen a huge mass ejection of the surface of a star,” said lead researcher Andrea Dupree of the Center for Astrophysics, Harvard and Smithsonian in a statement. “We are left with something going on that we don’t completely understand. It’s a totally new phenomenon that we can observe directly and resolve surface details with Hubble. We’re watching stellar evolution in real time.”