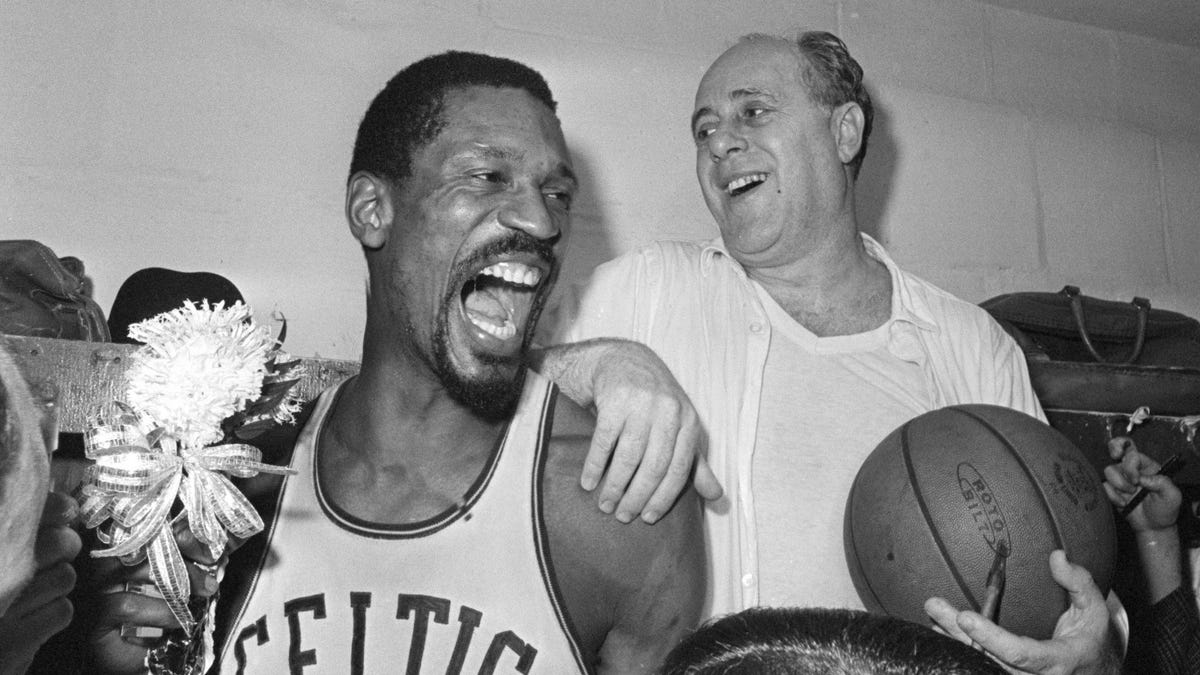 Boston Celtics’ Bill Russell, left, holds a corsage sent to the dressing room as he celebrates with Celtics coach Red Auerbach after defeating the Los Angeles Lakers, 95-93, to win their eighth-straight NBA Championship, in Boston, in this April 29, 1966.Image: AP

According to a statement released on social media, NBA legend Bill Russell died “peacefully” Sunday at the age of 88.

Born Feb. 12, 1934 in Monroe, Louisiana, Russell’s family moved to the Bay Area when he was eight years old to escape racism in the South. It was there he became a standout basketball phenom, using his size, lengthy wingspan, shot-blocking prowess, and advanced instincts to become one of basketball’s early defensive innovators. During his junior and senior seasons at the University of San Francisco, Russell led the Dons to consecutive national championships, won gold at the 1956 Olympics, then became one of the NBA’s first Black superstars when he was drafted by the Boston Celtics in 1956.

Over the course of his 13-year career, Russell was at the forefront of one of the NBA’s most prestigious franchises. In 12 trips to the summit, he won 11 NBA championships, a mark that remains the gold standard over 50 years after his retirement. Off the court, he endured racism and discrimination in Boston. Russell was not immune to the consequences of being black in Boston. He’s openly discussed the racism he endured, once writing in Slam Magazine, “During games people yelled hateful, indecent things: ‘Go back to Africa,’ ‘Baboon,’ ‘Coon.’ ‘Nigger.’”

Russell channeled his energy into social activism during the Civil Rights era. On June 4, 1967, Russell joined Muhammad Ali, Jim Brown, Lew Alcindor, and a slew of other black athletes for the Cleveland Summit where they expressed their support for Ali’s decision not to serve in the Vietnam War.

Information about his memorial service hasn’t been released yet.