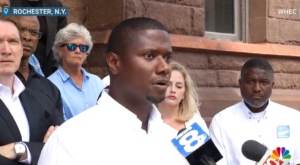 According to Huffington Post, a Rochester, New York, Black firefighter intends to sue the Fire Department and the city for $4 million after being forced to attend a racist party in July.

Jerrod Jones, a 14-year veteran of the Rochester Fire Department, alleges that Captain Jeffrey Krywy took him and three other firefighters to a party at a mansion in an affluent Rochester neighborhood that ridiculed Juneteenth, displayed fried chicken buckets, and other racist imagery; the Democrat & Chronicle reported.

Rochester firefighter Jerrod Jones explains why he is suing the city and RFD after he was ordered to an allegedly racist and politically charged party while on duty. @rgorbman @WXXINews @roccitynews pic.twitter.com/eLu8xsR9yg

“It means a lot to me when I put that uniform on, and I’ve always wanted to represent my city in a correct manner, in a decent manner, in an honorable manner, and what I had to experience a month ago, it cut me very deeply,” Jones said, speaking outside the Rochester City Hall at a press conference, according to WRGB.

Jones felt uncomfortable when he entered the mansion and saw a cardboard cutout figure of former president Donald Trump because firefighters are not permitted to attend partisan political events while on duty, CBS News reported.

In a notice of claim, Jones said the fire crew wore their uniforms when they arrived at a large home for the soiree, according to Huffington Post.

NEW: Rochester firefighter Jerrod Jones says his captain took him to attend a Juneteenth spoof party while on duty. Jones’ attorney has filed a notice of claim against the City of Rochester and RFD. @news10nbc pic.twitter.com/XGsimkGvxF

Jones also saw two large Juneteenth flags, KFC buckets of chicken, and a woman impersonating Democratic county legislator Rachel Barnhart in a “mocking but sexual” manner, according to the claim.

He also noticed photos of local Democratic politicians “on stakes” on the property. One of his colleagues said, “we shouldn’t be here;…