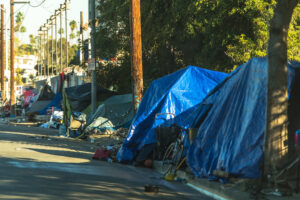 Black residents of Miami’s Virginia Key Beach are speaking out against the city’s approved plan to build tiny homes for the homeless and relocate them to predominantly Black towns.

The pilot program was approved by Miami city commissioners to combat homelessness, CBS News reports. Tiny homes were built to relocate the homeless from downtown Miami, Overtown, and Little Havana into temporary homes.

However, Black Miami residents are complaining about two locations that go from Virginia Key Outdoor Center and biking trails and a state-owned lot under I-95 in Liberty City at the corner of Northwest 71st Street and Fifth Place.

“What the current leadership in the city of Miami is doing is targeting communities of color, more so the Black community,” said Harold Ford with the local chapter of the NAACP.

“I’m concerned because all the locations seem to be focused on one demographic of our community and that’s really the Black community.”

Miami Commissioner Ken Russell expressed concern not just over the proposed location but the isolating of a vulnerable population, Local 10 reports.

“What you are going to have is homeless individuals who get dropped here by the dozen who are just wandering around Virginia Key with no services and no future,” Russell said.

The commissioner who proposed the Virginia Key spot, Joe Carollo, is accused of backing other controversial plans connected to the homeless population, the Miami Herald reports. Among Carollo’s alleged controversial projects include prohibiting encampments on public property and giving police the power to arrest homeless people if they refuse to go to a shelter.