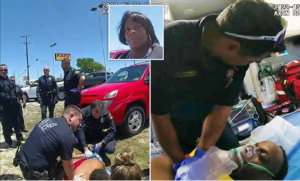 A Black trans woman died in police custody last month in Texas, and now there is an investigation into what exactly transpired.

According to The Daily Mail, 47-year-old LaDamonyon Dewayne Hall passed away last month on May 26 while in the custody of Dallas police. The cause of her death is now under investigation.

Dallas police are now saying that they are investigating the death as body camera footage was recently released showing the actual arrest from May 26, 2022. The Dallas Police Department (DPD) released the interaction publicly last week.

Police received a 911 call stating that Hall was causing problems inside a business. It was speculated that Hall was drunk. The person who placed the phone call felt Hall was under the influence of alcohol or drugs because she had fallen and was yelling.

After Hall was approached, she initially appeared scared and confused and cooperated with police officers, but then she became increasingly agitated. Dallas police officers apprehended her and placed her in a spit hood as they loaded her in the back of an ambulance.

As the police officers placed her into the ambulance, she appeared to be struggling for air. Thirty minutes later, Hall was pronounced dead in an emergency room.

Rhodes stated that the case was under review by the Dallas Police Special Investigation Unit, and police officials are still waiting for a toxicology report.

When Dallas Morning News questioned why it took almost two weeks to report the death, police spokeswoman Kristin Lowman said the department needed the time to show the video footage to Hall’s family and interview them. Police department general guidelines state bodycam footage should have been released within 72 hours of the incident. Lowman said the time can be extended “at the…