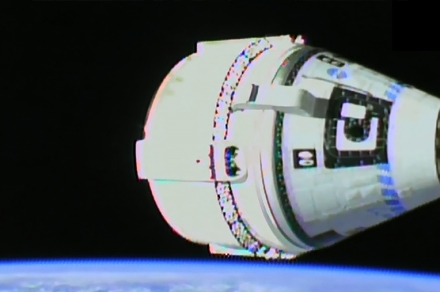 Following a nail-biting launch on Thursday, May 19, Boeing’s new crew capsule Starliner has successfully docked with the International Space Station (ISS). The capsule, which is intended to carry astronauts from Earth to the ISS, is performing an uncrewed test fight called Orbital Test Flight 2 or OFT-2, following a long series of problems and delays.

The Starliner CST-100 spacecraft, which launched from Space Launch Complex-41 at Cape Canaveral Space Force Station in Florida, docked to the ISS’s Harmony module at 8:28 p.m. ET on Friday, May 20. It arrived just over 24 hours after launch, but the docking did not go entirely smoothly. The docking time was delayed by an hour due to technical issues with the docking process, during which time the engineering team had to retract and redeploy Starliner’s docking hardware.

The craft also had issues with two of its thrusters, which cut off too early during the craft’s orbital insertion. “The teams have concluded that a chamber drop in pressure caused the cutoff,” NASA wrote in an update. Though the agency went on to stress that this was not a critical fault: “That system operated normally during all of the propulsion system demonstrations, and with redundancies in place, does not pose a risk to the rest of the flight test.”

All eyes have been on the test flight this week as a previous attempt at the OFT-2 test in December 2019 went badly, with the craft failing to reach the ISS and subsequent testing bringing to light serious issues. Another planned flight last year was called off when yet more issues were discovered. Despite the relatively minor issues in the test flight today, the craft did make it safely to the ISS which bodes well for its future use.

Now, Starliner will stay at the ISS for a few days before departing, so that the landing system can be tested as well. “Starliner is scheduled to depart the space station Wednesday, May 25, when it will undock and return to Earth, with a desert landing…