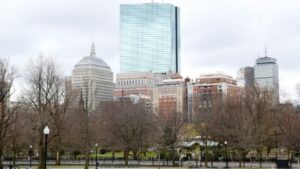 The city of Boston is on a path toward reparations as part of the ownership the city is taking for playing a role in the trans-Atlantic African slave trade.

On Wednesday, the Boston City Council voted unanimously to approve a resolution in response to the city’s role in the trans-Atlantic slave trade, the Boston Globe reports. The city issued a formal apology for “the death, misery, and deprivation that this practice caused.”

The resolution vows “to dedicate policies and efforts to repair past and present harm done to Black Americans via systemic racism.”

Financial reparations and studies aren’t included in the resolution, and it also doesn’t commit the city to any specific policies toward healing the centuries of harm that slavery caused.

“When a harm is done, the first step is to acknowledge the harm and apologize,” City Councilor Tania Fernandes Anderson said. “Now is a good time to do so.”

In the non-binding resolution, the city pledges to remove “prominent anti-Black symbols” and educate residents on the history of Boston’s slave trade, among other things, Boston.com reports.

The council is now considering a separate proposal to form a city commission that will weigh reparations and other forms of atonement for Boston’s legacy of slavery and racial inequality.

“Having the city of Boston apologize for slavery was once unthinkable,” Rev. Kevin Peterson of the advocacy group the New Democracy Coalition said.

“We have found something to build on for the healing of the city.”

“Boston is revered for our role in this country’s founding, but we must acknowledge and address the dark pieces of that history that too often go untold,” Wu said.

“We must learn from our past, right wrongs, and build an equitable Boston that works for everyone.”