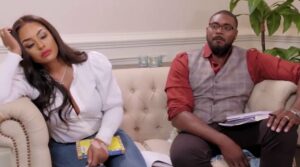 Basketball Wives star, Brandi Maxiell, is opening up about her experience on Iyanla Fix My Life and revealing how “mad” her husband, Jason Maxiell, was at the inspirational speaker.

Brandi appeared on DeDe’s Dope Podcast last week, where she was asked about Jason’s confession on Fix My Life, where he admitted to cheating on his wife with 50 women. Vanzant used bandages on Brandi, sat down for an in-depth one-on-one, and put on her in-your-face approach to get Jason to acknowledge the pain he put Brandi through.

But Brandi says Jason was not impressed with the experience and walked away with resentment toward Vanzant.

“When that happened, it was like Jason was so mad at that lady,” Brandi said.

“He was so mad at her,” she restated.

Brandi also acknowledged that Jason had slept with 341 women throughout his life, including the 50 women he claimed to have cheated on his wife with.

“First of all, I thought it was weird,” Brandi said of Jason’s 50 affairs.

Yet, despite Jason’s messy history of cheating, Brandi chooses to stick beside him. The couple is still married, and Brandi credits therapy for keeping them together.

“It was just the perception, the edit of how it was and everything,” Brandi said. “I mean to know my husband, he’s a good guy.”

With Brandi and Jason being high school sweethearts, she chooses to remain patient with her husband despite how he’s violated their marriage.

“I was humiliated, I’m not gonna lie. And one thing that I did learn from her is that she was like, ‘It’s something deeper.”

“He needs to know his father; he needs counseling. It was drinking… and then too; it was retirement. He didn’t know how to handle that,” Brandi explained.