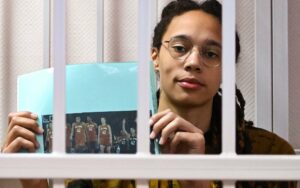 On Friday, Brittney Griner was due in Russian court, where her defense team revealed the WNBA star did indeed have permission for the marijuana pen she faces felony charges for. According to NPR, Griner’s attorneys submitted into evidence a medical marijuana prescription issued by?? a U.S. doctor to treat pain, although medical cannabis is still not legal in Russia.

“The attending physician gave Brittney recommendations for the use of medical cannabis,” said lawyer Maria Blagovolina. “The permission was issued on behalf of the Arizona Department of Health.”

Additionally, her defense claims Griner was subjected to drug tests in order to play, and no substances were found in her system.

On July 7, the Olympic star pleaded guilty to drug charges in the Khimki court. As previously reported, with the guilty plea, she is facing a prison term of up to 10 years. She told a judge that she had brought hashish oil into Russia but had done so “inadvertently” as she asked the court for mercy.

She maintains she unknowingly had the cannabis pen in her belongings because she hurriedly packed her luggage to return to the states at around the time of the start of the Russia-Ukraine war.

Since then, Griner’s trial has concentrated on written testimony of character references and in-person appearances.

During the July 15 hearing, the Phoenix Mercury baller held up a picture of WNBA players while in the defendant’s cage, wearing her name and No. 42 on their jerseys in solidarity with the athlete during the Sunday All-Star Game in Chicago.

Striking image of Brittney Griner during a hearing in Russian court today, holding a photo of her fellow WNBA players wearing her number and name on jerseys during the second half of the All-Star Game

Russian officials allege Griner is expected to remain incarcerated through Dec. 20. Her lawyers, on the other hand, estimate an August end date.

While the Biden administration declares her “wrongfully detained,” Russia has been…