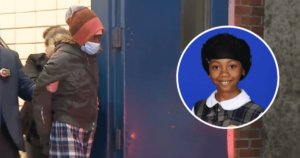 A Brooklyn mother is being held without bond after brutally beating her 9-year-old daughter to death inside of their Crown Heights apartment.

Shemene Cato, 48, was arraigned on Tuesday and charged with second-degree murder for brutally beating Shalom Guifarro, 9, and her 13-year-old sister for two hours before fatally injuring Shalom on Sunday, NY Post reports.

Cops finally showed up after the 13-year-old managed to sneak off and call 911. Police arrived at the apartment around 1 p.m. and found Shalom unconscious and badly bruised.

The girl was attempting o escape the attack and crawled under the bed, Pix 11 reports. When Cato tried to pull her out from under the bed, one of the legs broke and the bed fell on the child’s head, prosecutors claim. The girl suffered multiple blunt force injuries to her head, face, and body and died of internal bleeding.

Cato was arrested Monday after the medical examiner ruled the girl’s death a homicide. Neighbors say they often heard yelling and screaming coming out of the apartment.

“I heard a lot of screaming and fighting from the apartment,” neighbor Jason Rahimzadeh said.

“I heard loud arguments at least 10 times, where they were screaming at the top of their lungs. The family kept to themselves.

Court records show police had visited the apartment 14 times in the past for domestic violence reports. However, most of the cases were Cato’s complaints of alleged harassment by her ex.

Neighbors say they witnessed Cato being volatile towards her kids.

“Their mother frequently cussed them out and wouldn’t let them play with the other kids on the block,” Bart Hubbuch, who owns the bar near the apartment, said.