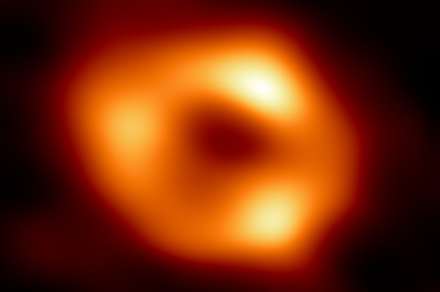 At the center of our galaxy is an enormous black hole, surrounded by a swirl of glowing hot gas which forms a ring structure around the black hole itself. This structure was famously captured in the first-ever image of the supermassive black hole, named Sagittarius A*, which was released earlier this year. Now, scientists have discovered an oddity in this dramatic environment, detecting a bubble of hot gas which is orbiting around the black hole and its ring structure.

As shown in this video animation, the bubble of hot gas is moving around the black hole in a similar manner to the way the Earth orbits the sun. This bubble of gas wasn’t seen in the image of Sagittarius A* (which was captured by a collaboration called the Event Horizon Telescope) but instead was inferred from observations using the Atacama Large Millimeter/submillimeter Array (ALMA).

This is the first image of Sagittarius A* (or Sgr A* for short), the supermassive black hole at the center of our galaxy. It was captured by the Event Horizon Telescope (EHT) collaboration. EHT Collaboration

One notable fact about the bubble is the tremendous speed at which it is moving, according to lead researcher Maciek Wielgus of the Max Planck Institute for Radio Astronomy. “We think we’re looking at a hot bubble of gas zipping around Sagittarius A* on an orbit similar in size to that of the planet Mercury, but making a full loop in just around 70 minutes,” Wielgus said in a statement. “This requires a mind blowing velocity of about 30% of the speed of light!”

The discovery was made using data collected for the Event Horizon Telescope project, which Wielgus and colleagues were also a part of. Some of these observations caught the aftermath of an X-ray flare, which is thought to be caused by hot gas close to the black hole. In this case, the researchers saw the flare not only in the X-ray wavelength but also in radio wavelengths. That supports the idea of a hot gas bubble giving off flares, which can be used to study the magnetic field of the black hole.