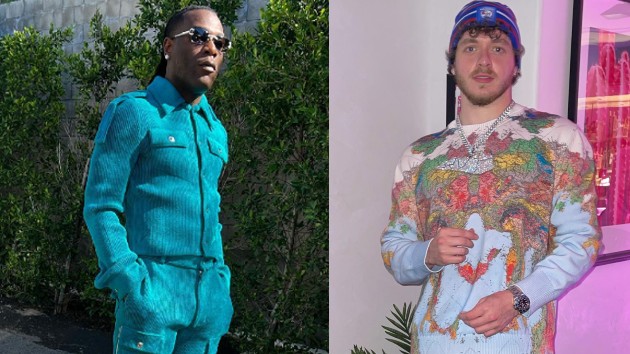 Burna Boy seemingly threw shade at MTV and “First Class” rapper Jack Harlow after the latter won Song of the Summer at the Aug. 28 Video Music Awards for his song “First Class.” The Nigerian superstar shared a viral Tik Tok video of a crowd of hundreds dancing to his single, “Last, Last,” at the tops of their lungs.

“When MTV says Jack Harlow had the song of the Summer,” he wrote over the video with the yawn emoji. ”Wow so many heartbroken people. #LastLast #Songofthesummer,” he added in the caption.

Burna Boy seemingly throws shots at Jack Harlow after winning an award for “Song of the Summer.” (Photo: @burnaboy/Instagram, @jackharlow/Instagram).

Harlow’s “First Class” debuted atop the Hot 100 earlier this year in April and again in May. The song, which samples Fergie’s 2007 hit “Glamorous,” reached the number-two spot on the chart. He took home four Moon Man awards at the VMAs, while Burna received none.

“Last Last,” from Burna’s latest album, “Love, Damini,” marks his first song to make the Billboard Hot 100 as a solo or lead artist. The Toni-Braxton sampled track peaked at number 63 and currently sits atop the Billboard U.S. Afrobeats Songs chart for eight weeks. The track taking over radio air waves and parties as one of the Best Songs of Summer 2022, named by Time Magazine and Esquire.

During an interview in July, the “African Giant” revealed that the track produced by Grammy-nominated producer Chopstix came from his idea to use one of Braxton’s classic hits: “He Wasn’t Man Enough.”

“It was actually my idea, to be honest. I just always wanted to use that sample,” the dancehall artist said on the “Million Dollar Worth of Game” podcast. “And I knew Chopstix could do something crazy with it. I just pointed that s–t out and took it from there.”

Burna also revealed that Braxton receives “60 percent” in royalties from allowing him to use the record. “I’m not complaining man. Hopefully, she pops out to one of the shows,” he said.