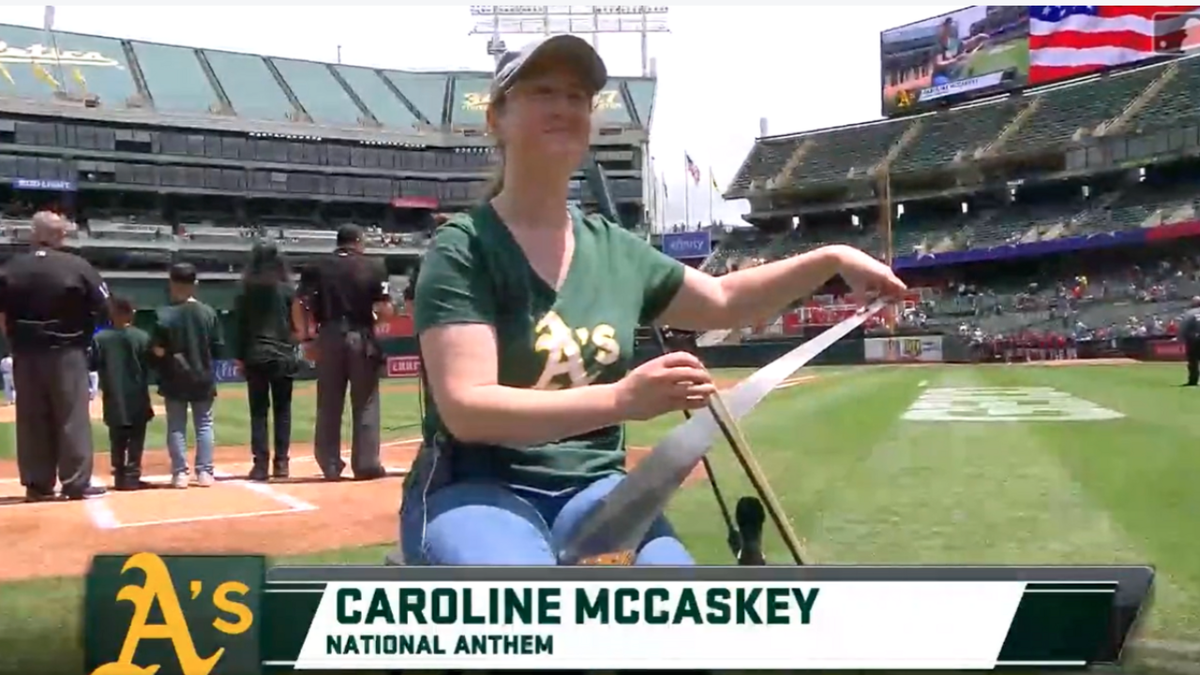 Playing or singing the national anthem at a professional sporting event is an honor to several musicians. Not only is it an opportunity to showcase their tremendous talent, but it also provides validation to the artist, telling them, “Yes, your music is good. Would you do us the honor of starting our competition with your talents?” Furthermore, the artist has an opportunity to market themselves when performing the national anthem. If they can provide an unforgettable experience, then perhaps they’ll gain a few more fans. Well, yesterday, the Oakland A’s had a national anthem that I know I’ll never forget.

Did any of you have “national anthem played on a saw” on their 2022 scorecard? No? No one? Can’t say I blame you.

This is fiddler Caroline McCaskey. According to the video, she’s a two-time international musical saw champion. I had no idea that was a thing, but hey, it’s pretty awesome, and I’m sure it looks great on her musical resumé. She has also been a part of the San Francisco symphony as well as the Colorado symphony, and in 2019, she won the U.S. National Scottish Fiddle Championship.

Listen to that anthem she played again. Tell me that doesn’t sound like a suspense rendition. It gives me huge ‘Bane standing in the tunnel with an explosive device in hand’ vibes. I don’t know about you, but I felt like something dreaded was going to happen after it finished, but then again, I’m very paranoid.

Obviously, this isn’t the first time someone has thought way out of the box for their rendition, but unlike some of those other renditions, McCaskey’s has been viewed mostly favorably. Other anthem singers who took the liberty of making their own version of The Star-Spangled Banner didn’t have that same luxury. The most infamous version was José Feliciano’s performance prior to Game 5 of the 1968 World Series. That almost ruined his career. Fergie prior to the 2020 NBA All-Star Game and Madison Rising at Daytona in 2014 are other examples of takes on the anthem that were viewed in a mostly negative light.

That being said, props to McCaskey for…