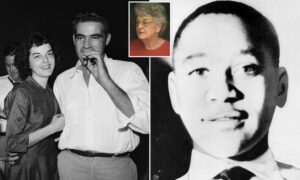 The saga of the circumstances that led to a young 14-year-old Black boy, Emmett Till being slaughtered by white, racist men back in Mississippi in 1955 has continued to add twists to the unfortunate story.

According to the Associated Press, a manuscript of an unpublished memoir that was written by the wife of one of the men who killed Till in 1955 was leaked to the public this week. The tome, which is written by Carolyn Bryant Donham, whose husband and brother-in-law lynched Till, is titled I Am More Than A Wolf Whistle.

The title may elude to Till being killed because he made “improper” advances toward her including using a “wolf whistle” to get her attention.

In the unpublished memoir, Donham claims that when her husband and brother-in-law brought Till to her to identify him as the one who made the advances toward her, she told them, “He’s not the one. That’s not him.” She says she told her husband that he wasn’t the one who whistled at her and tried to encourage him to bring the boy back home. Till was brought to her home in the middle of the night after the men kidnapped him before killing him.

“I did not wish Emmett any harm and could not stop harm from coming to him, since I didn’t know what was planned for him,” Donham says in the unpublished manuscript. “I tried to protect him by telling Roy that ‘He’s not the one. That’s not him. Please take him home.’”

She also states that Till actually identified himself as the boy that the two men were looking for.

The 87-year-old was only 21 when they abducted, killed and tossed the 14-year-old Black boy in a river. Her husband at the time, Roy Bryant and his half-brother J.W. Milam had been acquitted of murder charges. they later confessed to actually doing the crime later in a magazine interview.

Earlier this year, Till’s family put notice that Donham may have an outstanding warrant for his kidnapping, CBS News reported. They want her arrested on that warrant.

Donham was named in a warrant almost 67 years ago, accused of being involved in the abduction of the young Black boy. Till’s family wants Donham arrested to…