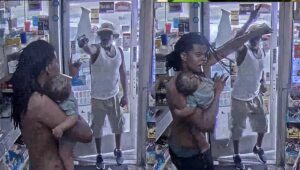 Detroit officials have cleared charges for a man who was captured on camera pointing a gun at a father carrying his baby while in a gas station.

The incident occurred on Father’s Day June 19, leading to charges for felonious assault, firearm, and brandishing a gun in public, reports the Detroit News. The man wielding the weapon, Euric Butler, 51, appeared in court in a preliminary hearing on Wednesday, where the court had no choice but to drop the case due to the man carrying his baby not appearing in court.

Per authorities, Butler and the 27-year-old dad got into an altercation almost a block away from the Valero gas station around 6 p.m. at the Hubbell and Tireman intersection.

The surveillance footage reveals who was later identified as Butler walking across the parking lot and inside the gas station, proceeding to point a firearm at the man with the 7-month-old baby.

The father manages to slap the gun from Butler’s hands and rushes towards the gunman while still holding the infant and allegedly locks the door. Outside footage shows Butler backing up out the door and attempting to flee from the store, but not before tinkering with the presumably jammed gun. He ran before police could arrive on the scene.

“We don’t know if it was a malfunction or a stovepipe or some kind of way – fortunately it didn’t go off,” Detroit Police Commander Michael Chambers explained.

Butler was taken into custody a day later on June 20, after an investigation by the Detroit Police Department and subsequently charged June 22.

The Valero gas station where the incident took place is part of Project Green Light, an initiative in Detroit that uses real-time community policing in collaboration with DPD’s aim to minimize crime.