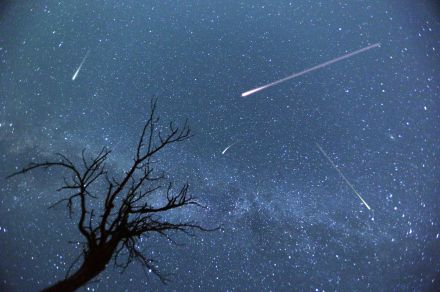 NASA is back again with its monthly review of what to look out for in the night sky over the coming weeks.

August offers up an exciting planetary pairing that’s worth a look, with the moon also getting in on the action.

The pairing involves a close conjunction of Mars and the distant ice giant planet Uranus, which you can see during the early part of August. NASA says that while you won’t be able to see Uranus with the naked eye, a pair of binoculars will help to bring both planets into view at the same time.

You can see the two planets by first bringing Mars into your field of view. You can then spot Uranus by looking just northwest of the red planet for a tiny, bluish disc.

Later in the month, on the morning of August 15, look skyward to see the moon appear just a finger’s width from Jupiter. “Like Mars and Uranus, they’ll make a great pairing through binoculars, and you’ll also likely catch a glimpse of Jupiter’s four largest moons,” NASA says in its monthly roundup.

In the days following that, the moon will move eastward to cozy up with Mars on August 19. “This is another nice pairing for binoculars, plus you’ll find the pair super close to the Pleiades [star cluster] — you may even be able to fit them all into the same view,” the space agency notes.

NASA also says that August is a great month to see Saturn as it transitions from a late-night and early-morning object to an all-night sight. To spot it, look low in the east around 9 p.m. for a steady, yellowish point of light. Peer skyward nightly and you’ll notice how it rises a bit earlier as the month goes on.

August is when the Perseid meteors come around, though this year the glare of a full moon will obscure all but the brightest of the shooting stars.

Still, NASA says that if you’re keen to try to spot some of the particles as they burn up in spectacular fashion in Earth’s atmosphere, then try to find a dark place away from light pollution on the night of August 12, when the Perseids meteor shower will be at its most active. “And don’t forget the occasional early Perseid can streak across the sky as…