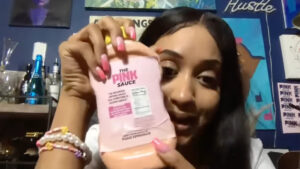 The Miami chef behind the viral Pink Sauce is speaking out against the overwhelming backlash on social media surrounding her creation.

According to Vice, Chef Pii said she’s been accused of “poisoning a nation” for a “mistake that I didn’t even make.”

The self-proclaimed “Pink Sauce Lady” is under fire after consumers have complained about the hot pink product she sells for $20 per bottle.

“I’ve been to therapy, thank God, I’ve practiced healthy mental exercises, however, now it’s affecting my children—I’m not tolerating it anymore,” she told Vice. “I know I’m not doing anything wrong behind closed doors. They can’t bully me.”

Since the sauce’s debut in early June, Chef Pii has had to defend her product against criticism regarding the inconsistency of the sauce coloring across different bottles and errors on the product’s nutritional label as well as its perishability and protection via ground shipping.

The series of videos attracted millions of views on TikTok. She explained that she got the sauce’s color from red dragon fruit; it is recommended to pair with foods like chicken tenders, burgers, burritos and salads. But the bottles did not feature a nutritional label at first, which sparked concerns about the food’s safety.

Controversy surrounding safety protocols came after Chef Pii posted a video of her distributing the pink sauce into containers out of her home kitchen. But she claims that her product is made in a commercial facility that is certified by the FDA.

“I’m a normal human being, and I woke up to a million insults,” she told the Washington Post. “The world is really curious about my creation. And they’re being malicious.”

The personal chef has made positive changes, like no longer using the same packaging and the United States Postal Service as a carrier due to the shipment complaints.

On Tuesday, the 29-year-old took her frustrations on YouTube live and said she was working with a laboratory and the FDA to ensure that her product is safe.