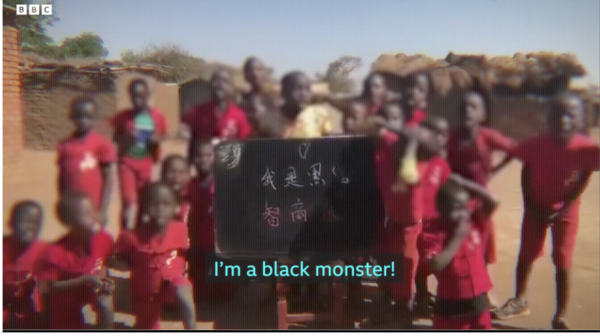 A Chinese man was arrested for child trafficking after a BBC documentary accused him of exploiting children in Malawi for social media notoriety and financial gain.

BBC reporters discovered that Lu Ke was filming children as young as 6 making video greetings mocking and calling themselves the “Chinese equivalent of the N-word.” Lu would pay the children about 50 cents a day, and if they did not listen, he would pinch or whip them, one child said.

Viral video show children in Malawi calling themselves a racial slur while someone off camera instructs them. (Photo: YouTube/BBC)

“When I made a mistake and when we did something wrong, he would whip us with a stick and give us detention,” said Bright, a 6-year-old boy who starred in several of Lu’s videos.

Lu lived in a Malawian village for several years, paying the children to make the videos popular among Chinese viewers. In one video Lu allegedly made, he instructs the children to say, “I am a Black monster, and my IQ is low.” Runako Celina, one of the journalists who tracked down Lu for the BBC documentary, said the derogatory term used in the video could also be translated to “Black devil.”

Lu was caught on a hidden-camera video admitting that he filmed the footage instructing the children to make the racist message but quickly recanted, telling the journalist who was undercover to delete the message.

Lu also told the undercover journalist, who pretended to seek advice about the greeting video industry, not to “pity” the children.

Greeting videos featuring Africans are popular on social media among people in China. According to the documentary, the videos sell for between $10 to $70. The IQ video was posted on social media page called Jokes About Black People Club in February 2020. It was met with mixed reviews, but some were outraged and demanded that it be removed. Parents of some of the children in the video said they were not aware of what the Chinese man was doing.

Bright, known by the name Xiao Gulah in the videos, is a poster child for the African…