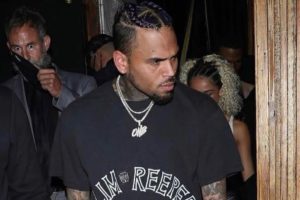 Singer Chris Brown appeared on an episode of Drink Champs on June 24 and spilled some tea about his relationship with music icon Diddy. Brown told the podcast’s hosts DJ EFN and N.O.R.E. that the music producer turned him down when he asked about being on Diddy’s label, Bad Boy Records.

The “Run It” singer told the podcast hosts he was only a 12-year-old when he went to speak with Diddy about recording on his music label. At the time, Brown was in a group with no name along with his friend, TJ.

“The funniest part, like, a lot of people don’t really know this, but Diddy turned me down. Imma keep it 100,” he said. “So I was like 12, at this time. This was before I linked to Def Jam. It was me and one of my production managers’ son named TJ; he’s my brother to this day. Me and him were like a group.” The hosts joked that Brown wasn’t signed because his group had no name.

The recording artist also spoke about his love for music icon Michael Jackson, to whom he is often compared, during a recent appearance on BigBoyTV. Brown said Jackson was a musician who could not be replaced.

“I feel like nobody can replace that man,” he said. “He’s still the end all be all when it comes to entertainment — even subject matter in songs. He’s like Jesus to me so I feel like I could never be in his shoes.”

Brown went on to say that he was inspired by Jackson and his magic, but he is not better than the late recording artist. “I could only be inspired by him. I don’t want to imitate him because his magic is his magic. Me being able to even have that conversation, I’m flattered but I’m also honest with myself like, ‘Hell nah, you ain’t f—g better than no Michael Jackson.’” Brown dropped his new album, Breezy, on June 24.