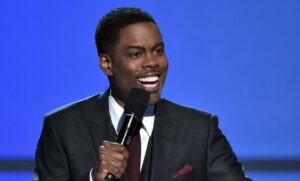 Last week, Jada Pinkett Smith said she wants her husband, Will Smith, and the man he struck at the Oscars, Chris Rock, to “reconcile.” Rock, however, is no rush to do that.

According to Entertainment Tonight, a source close to Rock says he has no interest in what Pinkett Smith has to say at this moment.

“He’s not concerned with the Smiths at the moment,” the source says. “He’s touring and he’s preparing for a comedy special.”

Two months after Rock teased Pinkett Smith about her bald head at this year’s Academy Awards, she finally spoke about the incident.

On her recent Facebook Watch series, Red Table Talk, last Tuesday, Pinkett Smith hosted a candid alopecia-themed episode. She claimed to have received “thousands” of responses from people after the incident at the Oscars.

On the show, she stated, “Now, about Oscar night, my deepest hope is that these two intelligent, capable men have an opportunity to heal, talk this out, and reconcile.

“The state of the world today? We need them both, and we all actually need one another more than ever. Until then, Will and I are continuing to do what we have done for the last 28 years, and that’s keep figuring out this thing called life together. Thank you for listening.”

Rock, while on stage at the Oscar presentation,  jokingly referred to Pinkett Smith, who was sporting a bald head, as starring in the sequel to G.I. Jane, the 1997 film featuring a bald Demi Moore. Late last year, the actress took to Instagram to speak about having alopecia and how she is not going to let the balding condition stop her.

There were some gasps in the audience and the camera shows Jada not at all happy with Rock’s comments. “That was a nice one!,” said Rock, who quickly tried to get back to his

We all know what happened next.