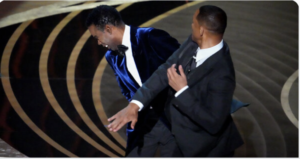 Chris Rock had Will Smith jokes during his set in Atlanta, Georgia on July 29, according to CNN. Rock was performing in Atlanta at the Fox Theatre as part of his comedy tour, Chris Rock Ego Death World Tour.

Rock’s set came just hours after Smith shared a nearly six-minute video apologizing to Rock for slapping him during the live Academy Awards ceremony in Los Angeles on March 27. Smith said he was “deeply remorseful” for slapping the comedian over a joke about Smith’s wife, Jada Pinkett Smith.

Rock hasn’t publically responded to the incident but has made several jokes during multiple performances since the infamous slap occurred. During his performance in Atlanta on Friday, Rock reportedly compared Smith to Death Row Records co-founder Suge Knight. Rock also noted that he wasn’t a victim.

“Everybody is trying to be a f—ng victim If everybody claims to be a victim, then nobody will hear the real victims,” joked Rock.

“Even me getting smacked by Suge Smith … I went to work the next day, I got kids. Anyone who says words hurt has never been punched in the face.”

Smith, 53, apologized to Rock in a video shared on Friday and noted Rock is not yet ready to speak to him. “I will say to you, Chris, I apologize to you. My behavior was unacceptable, and I’m here whenever you’re ready to talk.” Smith also apologized to Rock’s mother and brother, Tony Rock, with whom he’d once had a close relationship.

“We had a great relationship,” said Smith. “Tony Rock was my man and this is probably irreparable.”

Smith also showed remorse for not apologizing to Rock, 57, during his acceptance speech after winning the Best Actor Oscar for his performance in King Richard. The actor resigned from the Academy and was banned from the Oscars for 10 years.