BREAKING NEWS
GMT-4 08:48
Home Economics Chris Rock Jokes He Has ‘Most of My Hearing Back’ After Will Smith Oscars Slap 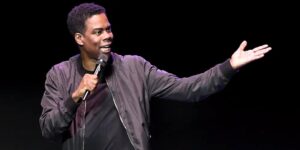 Chris Rock is bouncing back after being slapped by Will Smith at the Oscars. The comedian recently joked about the embarrassing attack during a standup show in the U.K.

Rock claimed that he wouldn’t joke about the slap during his “Ego Death” comedy show on Thursday, The Times of London reported. Eventually, he explained why words don’t hurt as much as being “punched in the face.”

“I’m OK, if anybody was wondering,” Rock said at the Royal Albert Hall in London. “I got most of my hearing back.”

He also teased when and where he would finally fully address the live televised smack heard around the world.

“People expect me to talk about the b——-. I’m not going to talk about it right now; I’ll get to it eventually,” he said. “On Netflix.”

Rock’s latest comments came after he said he wouldn’t talk about the slap until “I get paid.” It also comes after he took to the stage in Hollywood to make a light reference to Smith following an attack on Dave Chappelle by a fan during a live show, The New York Post reported.

“Was that Will Smith?” Rock asked after a man charged at Chappelle, knocking him to the ground during his set at the Hollywood Bowl. One day after Chappelle’s attack, the comedian appeared in a secret show at Los Angeles’s famed Comedy Store, where Rock jokingly said, “I got smacked by the softest n—- that ever rapped.”

Sources told the New York Times that comedy venues have started to beef up their security in the wake of the violent attacks against comedians.

Meanwhile, Rock’s family has offered their support. His brother Tony Rock spoke out against Smith, and their mother, Billie Jean Shaw, called out Smith for not personally apologizing to Rock after the live televised slap.

Will Smith released a public apology and accepted his 10-year ban from attending the Academy Awards. There has been no word on if he has spoken to Chris Rock.