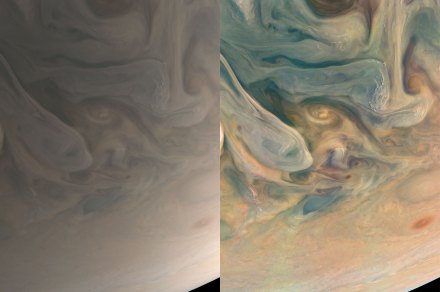 We’re used to thinking of Jupiter as an orangey-brown sort of color, with its distinctive colored features like the Great Red Spot. But a recent image of Jupiter shared by NASA shows the planet in quite a different color palette, showing the planet’s clouds in two different formats. Firstly, there’s the planet as the human eye would see it, in Earthy, browny beige shades tinged with green. And secondly, there’s a saturated version that shows off the details of the cloud formations in vivid teals and greens.

The images were made from data taken by NASA’s Juno spacecraft, and they were processed by citizen scientist Björn Jónsson, an amateur image processor who shares his work with the public.

NASA’s Juno spacecraft observed the complex colors and structure of Jupiter’s clouds as it completed its 43rd close flyby of the giant planet on July 5, 2022. Citizen scientist Björn Jónsson created these two images using raw data from the JunoCam instrument aboard the spacecraft. At the time the raw image was taken, Juno was about 3,300 miles (5,300 kilometers) above Jupiter’s cloud tops, at a latitude of about 50 degrees. North is up. At that moment, the spacecraft was traveling at about 130,000 mph (209,000 kilometers per hour) relative to the planet. Image data: NASA/JPL-Caltech/SwRI/MSSS Image processing by Björn Jónsson © CC NC SA

Turning observations from spacecraft or telescopes into an image is a detailed process requiring many particular decisions about color, contrast, and balance, which affect how the final image turns out and which features it emphasizes. It is possible to process an image to make it as close to what we would observe personally if we were to travel to the object, like the image of Jupiter on the left. But it’s also useful to make adjustments like turning up the saturation and contrast to help see features like cloud shapes in sharper detail, as you can see in the image of Jupiter on the right.

In the more saturated image, you can see features of Jupiter’s atmosphere like its deep swirling vortices, and the different colors can help to pick out different…