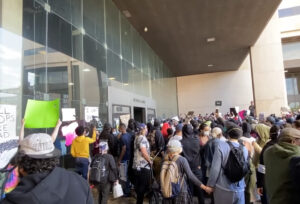 The city of Cleveland, Ohio has agreed to pay 12 protesters $540,000 for their wrongful arrests during the 2020 George Floyd demonstrations.

The large payout is a result of a federal lawsuit filed by a dozen people that were arrested during and after May 30, 2020 protests outside the Justice Center downtown, Cleveland.com reported. Over 20 Cleveland officers were also named in the suit filed in U.S. District Court last year.

Attorneys Terry Gilbert and Sara Gelsomino say those arrested were only peacefully protesting and caused no destruction or violence, yet they were still taken into police custody at Cuyahoga County Jail.

Some of those arrested sat in jail for three days before being released without facing any charges. Others were charged with felony aggravated riot and failure to comply, all charges that were later dismissed.

“They were innocent, peaceful protesters who were exercising their rights under the First Amendment to the U.S. Constitution,” Gilbert said.

Police were accused of using excessive force against the peaceful protestors, including pepper-spraying one woman who was kneeling down holding a sign, and bombarding the crowd with pepper balls.

“In the course of that day, these individuals were there passionately standing up for the family of George Floyd, and seeking reforms with respect to the epidemic of police shootings in this country–particularly against young, Black men–but also the widespread excessive force we see almost daily in police departments across the country,” Gilbert said, as noted by WKYC.

A few plaintiffs expressed their support for the settlement and continued to call out the police brutality and misconduct they were protesting against over two years ago.

“This is just a stitch in the fabric of reform,” plaintiff Shainna Bernard said. “Our goal is to combat police brutality and misconduct. That’s what we’re here to do.”

The 12 plaintiffs will split the money evenly and the city will dismiss all charges on their records, ABC News reported.