BREAKING NEWS
GMT-4 10:27
Home Economics Clifton Powell Opens Up About How He Schools His Son Who Is Dating Sasha Obama, On How to Treat Her 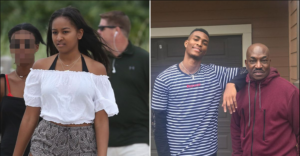 Clifton Powell Opens Up About How He Schools His Son Who Is Dating Sasha Obama, On How to Treat Her

The Saints & Sinners actor said his son, Clifton Powell Jr., and Sasha have been in a relationship for more than a year.

“That’s amazing, ’cause you know that they’ve been going out for about a year, and it just hit the press, right?” he said on the show.

“So, it has helped me talk to Chris about how to handle Sasha Obama because we love the Obamas, but Mr. Obama has a daughter that’s dating my son, and I have an opportunity and a responsibility, to make my son responsible, gentle, kind, loving, and supportive. The things that I did not get taught.”

The two allegedly became an official couple when Sasha moved to L.A. in August 2021, transferring from the University of Michigan to USC, based on reports, according to Hot 97.

Powell Jr. earned a four-year basketball scholarship to play for the University of California Santa Barbara but has now pivoted into pursuing a film career and works as a commercial director, The Cut reports.

Clifton Sr. advises and cautions his son to treat his girlfriend with care. “So, I text him all the time, and I say, ‘Treat Sasha like you would want somebody to treat your daughter.”

One parent that seemingly is shocked by the dating lives of Sasha and Malia Obama is our forever Flotus Michelle Obama, who admitted that her daughters are both in relationships on The Ellen Degeneres Show.

“They loved the Jonas Brothers,” Michelle said. “Now they’re bringing grown men home. Before, it was just pop bands. Now they have boyfriends and real lives and all that stuff.”

Malia, 23, is reportedly seeing Rory Farquharson, a British man she met at Harvard in 2017.